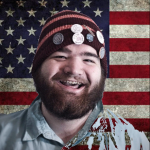 Last night, 1/4/2020, the SLC Police again violated the Constitution by raiding an encampment of unsheltered humans when the beds were full. I was there when the action happened and what I observed may enrage you.

I had been at this camp earlier in the day on 1/4/20 and in the morning on 1/3/20 as an observer. It was neat, ordered, well-designed. The organizers had signs and systems in place to keep things running. There were community marshalls, de-escalation teams, medical teams, food teams, and even a media team. All of these were organized with volunteer labor and sweat. People I talked to told me how they would take shifts and share the load.

Before 10:00 pm, there was a hurried quiet, like the calm before the storm. Some of the unsheltered were moving on, others hunkering down. The community defenders with them had received tips that the health department and/or police would be there by ten. They prepared accordingly, called the ACLU, held “know your rights” trainings, and prepped the community members who showed up from hearing their call to action on how to be as protected and defensive as possible once the police started their raid.

These organizers never minced words. They made it abundantly clear that anyone who stayed to defend the unsheltered would likely get arrested, and that there would be no judgement if anyone felt uncomfortable with or unable to take that risk.

Just after 10:00pm, at least 8 police suvs/cruisers showed up and started citing some city ordinance, warning that people needed to leave to the “south or west” to avoid further “police involvement”.

For what seemed like the first 15 minutes, they said there were 30 beds available. It didn’t take them long to change the story, and they started announcing that 79 beds were available. Furthermore, I talked to community defenders on the ground. They have people who always check, and were even checking in real-time as the police were there. The true availability of beds was zero.

Again, no beds were available. Per a 9th-circuit ruling, when shelter beds are full, raiding camps, harassing the homeless, or any other form of enforcing camping/curfew ordinances is unconstitutional. That means that, by simply showing up, every officer there last night was violating their oath to uphold the constitution and acting contrary to the supreme law of our land.

The bull-horn-behind-the-vehicle intimidation tactic continued for at least an hour. After that, cops in full body armor and riot gear showed up. (Around 11:00 pm)

These cops just stood there for minutes. Presumably, the police were waiting on orders to move in. After what seemed like an indefinite eternity, they shouted “move back” and aggressively began to march forward.

While the police still stood there, the unsheltered gathered in a group huddle and started signing songs of liberation. I couldn’t recognize the songs, but I did recognize the themes in those songs.

Despite the usage of rubber bullets, at least 2 officers had fully-fledged assault rifles pointed at the group of people there. As a reminder, this group wasn’t simply protestors. By the time I noticed the assault rifles, it was half community members, one/third media and the rest were demonstrators remaining active in their non-violent pushback of the police. These brave souls had formed a human wall of unshakable courage and were pushing back against the cops’ riot shields.

In shorter terms, the cops were prepared to use assault rifles to fire at civilians and media.

Later, on Twitter, the SLCPD posted images of the camp after they destroyed it, claiming the camp had been that much of a mess the whole time, citing “public health” as the reason for the raid. The last time I heard of police brutalizing homeless in such a heavy-handed matter and using “public health” and “cleanliness”, it was a pretext for their extermination at the hand of Nazi Germany and its state violence in the 1940s.

Please, ask yourselves: “What comes next?”

Update 1/7/2020: You can now check out a gallery of images taken from the raid at the following link: https://wolfoflightnews.com/?p=2293

I'm a photographer, journalist, and activist. I've been called a "prolific writer" by Jabari Morris, co-editor in chief of Real Progressives. I focus on national politics as well as Utah current events. I enjoy weaving the historical record into my articles for allegory and reference. In addition to my work here at the Lighthouse Tribune, you can find some of my other works at Real Progressives.

Find more about me on:

I'm a photographer, journalist, and activist. I've been called a "prolific writer" by Jabari Morris, co-editor in chief of Real Progressives. I focus on national politics as well as Utah current events. I enjoy weaving the historical record into my articles for allegory and reference. In addition to my work here at the Lighthouse Tribune, you can find some of my other works at Real Progressives.

Only We can save ourselves because no one else cares.

Republicans care more about the climate if you speak their language

Bipartisan Senate Infrastructure Plan Is a Stalking Horse for Privatization

Any cookies that may not be particularly necessary for the website to function and is used specifically to collect user personal data via analytics, ads, other embedded contents are termed as non-necessary cookies. It is mandatory to procure user consent prior to running these cookies on your website.